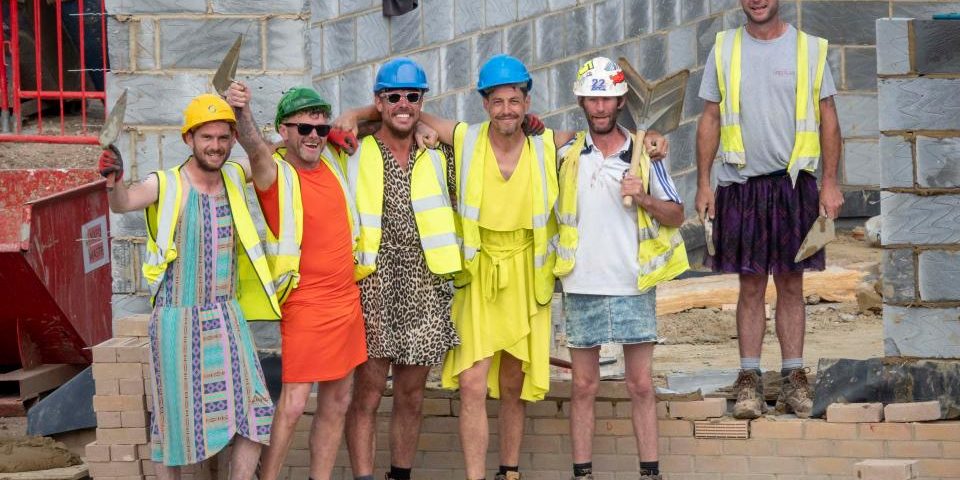 But they realised they could beat the ruling under gender equality regulations, so all agreed to arrive in frocks and skirts.

Some nipped to the ladies department in Tesco while others raided their partners’ wardrobes.

And yesterday scaffolding at the Bellway Homes development in Chertsey, Surrey, was turned into a multi-coloured catwalk.

Bearded Simon Miles, 45, who wore a denim skirt nicked from his missus to match caramel Dewalt boots, said: “I’ve heard nothing like it in 20 years.

“I turned up for work on ­Monday and was told my legs had to be covered on site.

“Shorts were made for brickies. I was going to find another job and some of the other lads were really struggling and uncomfortable in jeans. We gathered it was a health and safety issue.

“But we realised that as there were women working in offices on the same site in skirts, they couldn’t stop us doing the same.”

The lads were also inspired by The Sun’s tale of boys at a school in Sonning Common, Oxfordshire, who beat a shorts ban by wearing skirts — citing the head’s gender-neutral uniform policy.

Simon went on: “I dashed home and the wife thought I was a lunatic when I started rummaging through her gear.

“A bloke even wolf-whistled me. I’ve never had one of those before — well, not from a man.”

Simon, who later switched to a bright green slinky dress, added: “There is of course a serious side.

“On building sites a skirt could easily get caught on something